The checkpoint is gone!?! 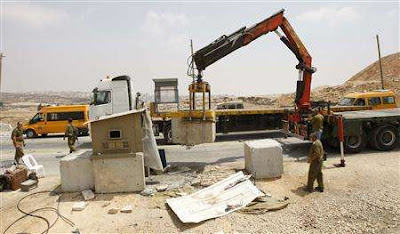 When my husband told me they Israelis were removing the checkpoint between where we live and Ramallah yesterday, I thought he was joking, but they really did it. Honestly, I would not be surprised if they put it back later, but I hope it stays gone at least until after Ramadan. When was the last time it was possible to get from Bir Nabala to Ramallah without passing a checkpoint? Years and years. Before they put up the wall and this new checkpoint, we used to go to Ramallah through the Qalandia checkpoint. That checkpoint has been there since the mid 90's, although at first it was not always manned. Of course we still can't get to Jerusalem or even upper Beit Haninah without passing Qalandia. But at least I can get to the town of Ram without passing a checkpoint, which I used to be a 25 minute walk. It still will be a much longer trip, but you have no idea what a relief it will be to not have to go through that checkpoint. And, a certain friend of mine has refused to visit me for months because the last time she came here, her car was damaged by the way the checkpoint forced the Ramallah bound traffic to swerve around rocks and drop off the pavement at the checkpoint. So I expect a visit now M!

BIR NABALA, West Bank (Reuters) - Israel, under international pressure to ease restrictions on Palestinians, removed a checkpoint in the occupied West Bank on Thursday that had curbed movement outside a main Palestinian city.

The move came ahead of a planned visit by Secretary of State Condoleezza Rice next week to continue to push Israelis and Palestinians to pursue talks Washington has hoped could lead to a peace deal by early next year.

An Israeli military spokesman said soldiers had been instructed to remove concrete blocks and a checkpoint where soldiers inspected traffic leading to Bir Nabala, a town near Ramallah, where the Palestinian government sits.

It was the third such checkpoint Israel has removed this month, meeting requests from the U.S. and Middle East envoy Tony Blair to help peace moves and to bolster Palestinian President Mahmoud Abbas's Western-backed government.

Tawfiq Nabali, head of the Bir Nabala village council, said the checkpoint that was lifted had restricted movement for more than 50,000 Palestinians living in 15 villages near Ramallah.

"We welcome any step in which the Israeli occupation leaves us alone, living in dignity without checkpoints and racism," Nabali told Reuters.

Palestinians say hundreds of Israeli roadblocks erected in the past eight years in occupied territory stifle their economy and amount to collective punishment.

Israel, which placed most of the barriers after a Palestinian uprising erupted in 2000 when peace talks failed, says the measures are necessary to prevent suicide bombers from reaching its cities.

Posted by alajnabiya at 7:27 AM

Email ThisBlogThis!Share to TwitterShare to FacebookShare to Pinterest
Labels: checkpoints, in the news

Alhamdu Lillah, really pleased to read this. Don't know if it's progress but as you said it will make life easier for you. How many checkpoints are there around Gaza and Al-Quds?

Hope you get that (overdue) visit from your friend soon!

Always reading your blog but with some of the sad situations reported I'm not sure what to respond apart from "subhan Allah" :( May Allah improve the situation of the opressed and bless them abundantly.

hmm, wonder if it will go back up after Ms Rice leaves... such a shame they feel that this will make a diff.. insha'allah it stays down and its the start of many

Hooray! I just hope it's not only for show for Rice's visit. I know this will make your lives easier - I hope it stays that way.