from the belly of the whale

I popped my camera in my purse when I went shopping for groceries yesterday, but as I walked I thought about how little around me would make a nice picture. It was too hot and the dry wind blew bits of garbage around. There are plenty of ugly things to look at, and if that is what you choose to see, then that is all you will see. But if you look for good things, you can almost always find them. Not everything I noticed on my walk would have made a nice picture, but there were still things that made me smile. I walked past a school, and heard at least a dozen children children reciting Qur'an at the top of their lungs. At the store, my total was 51 shekels. I handed the shopkeeper a hundred, and fished around in my wallet for a one, but he gave me 50 change and wouldn't take the one I handed him. I know it's not a big thing, but how many places do the shopkeepers refuse to take as much money as you hand them? The thing I like about it is that it is common, not strange. I have had taxi drivers refuse to take money from me when I only needed to go a short distance.

I did take one quick picture, of a herd of goats wandering across the road, with no shepherd in sight. 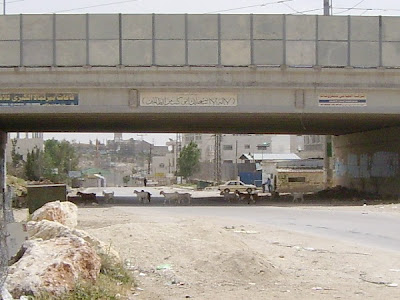 They were safe. The road they were walking on used to be very busy. It was the main road into our village, and when my older kids were little I wouldn't let them cross it because there was too much traffic. The road now ends abruptly just a few hundred meters from this point, where Israel's apartheid Wall cuts us off from the next town. I posted pictures of it in The End of the Road. I noticed that I already have two posts titled "The End of the Road," which is pathetic, but most of our roads come to a dead end. The Wall is all around us.

The bridge in the picture is for an Israelis-only highway. There are high walls all along it as it passes through our neighborhood. Here is what some of those roads look like on the inside of the walls. I don't know if the one through our neighborhood has anything pretty painted on it, because I have never been on the road that goes right past my home.

The sign on the middle of the bridge has a du'a from the Qur'an on it. (Sorry it is not clear.) I wouldn't have thought it was a good place to put Qur'an, because it is below the cars, but there it is. It is the prayer of the prophet Yunus (Jonah, alahi salaam) when he was in the belly of the whale.

"There is no deity except You; exalted are You. Indeed, I have been of the wrongdoers."
Surah al Anbiya', 21:87
Sometimes looking at all the walls and restricted roads and checkpoints, it feels like our lives are being swallowed whole by some great beast. In the next aya Allah says what means "So We responded to him and saved him from the distress. And thus do We save the believers." Ya rabbana, please accept our repentance and rescue us too.
Posted by alajnabiya at 10:50 PM

Email ThisBlogThis!Share to TwitterShare to FacebookShare to Pinterest
Labels: Life in Palestine, Qur'an

Ameen. Allah is with the patient ones.

Your post really moved me, masha Allah. I think sometimes there's a tendency just to display particular ayahs of the Qur'an without much thought into them, but that is such a well chosen and appropriate du'a that it's beauty and hope radiates from each letter. May Allah the Almighty keep the people of Palestine safe and reward them for their patience and faith.

Ameen. Thanks for stopping by my blog.