The end of the road

It was bright and sunny today, and much warmer outside than in the house, so I decided to take a walk. The village I live in has been almost completely surrounded by Israel's wall. They cut off every old road out of our area and built a new road to Ramallah for us, and then put a checkpoint on it. So there are just 4 villages in our open air prison, and a couple twenty-something soldiers guard the entrance day and night.

This road used to be the main road out of our area, and then after the intifada started, they blocked all the other roads, so it became the only road out. Now the road dead ends at the wall. The sign over the road says "Bir Nabala Welcomes You," although this was the end of Bir Nabala. The other side says "have a safe trip," or something like that. They put the sign up backwards! No matter, almost no one sees it now. 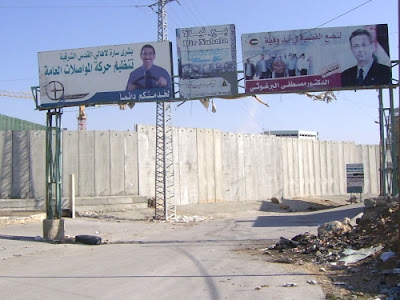 If you walk around the wall to the right, you see what is left of one of the buildings that was in the way of the wall. 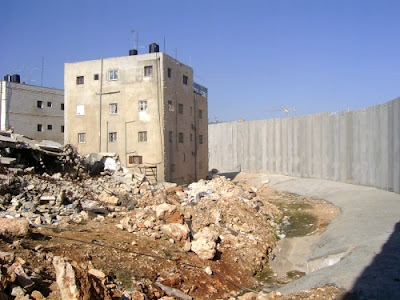 I decided to walk along the wall, up the hill, to see if I could still get a glimpse of East Jerusalem. 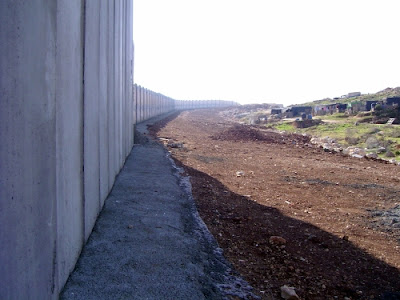 Many Bedu (beduin) families still live in the open areas between the villages, but they are running out of space. Between the wall and the "Israelis only" highway, They have a lot less room to move around in. 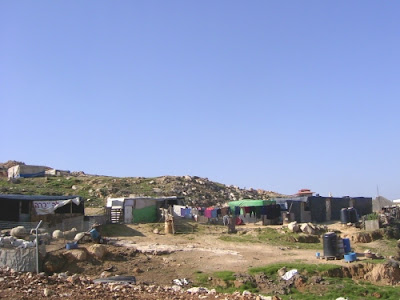 It will be about 40F/4C tonight. I hope they are warm enough. I know the pictures are small, but you can see that this is where they live; you can see the line of laundry. The wall that goes across the picture below is the "Israelis only" road. 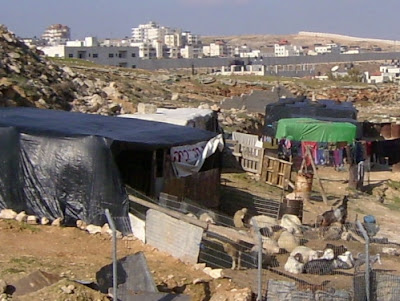 This is the view of Bir Nabala from the top of the hill. I had my back against The Wall when I took the picture, and that's the "Israelis only" Road in the valley. It looks kind of pretty from up here. 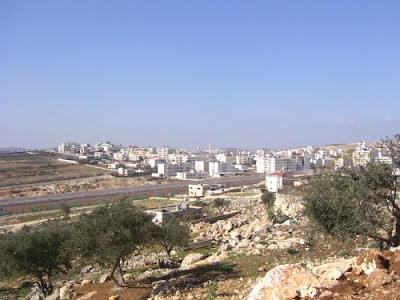 On the other side of this wall, it's considered Jerusalem. 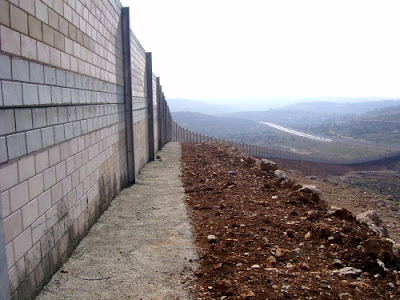 Here is where the "Israelis only" road meets "The Wall." On the other side of The Wall is Atarot, where the Israelis are considering building a new settlement. They are talking about 10,000 flats, for Orthodox Jews, in an area between East Jerusalem and Ramallah, completely surrounded by Palestinian neighborhoods. All the neighborhoods you see in the picture below are Palestinian, and all are on land occupied in 1967. Atarot is currently an industrial zone. 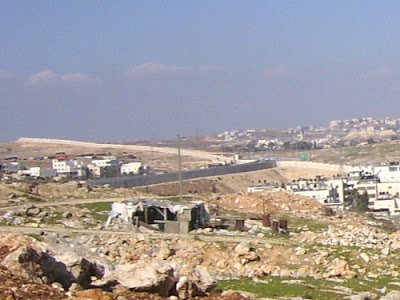 Can you see the tower in the picture above near where the road meets "The Wall?" Here is the same area, so you can see how high the road was built above the neighborhood it runs through. There was a shallow valley there before. Do you think they are trying to tell us they don't want the likes of us on their road? 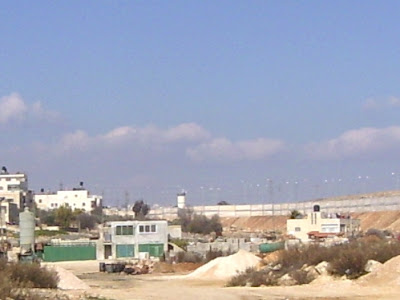 Thanks for taking a walk with me. Next time I will try to find some prettier pictures.
Posted by alajnabiya at 8:54 PM

Email ThisBlogThis!Share to TwitterShare to FacebookShare to Pinterest
Labels: The Wall

good pictuers....Its good to see Birnabala, I am from there :)

Thank you for stopping by my blog TJ. InshaAllah I will post more pictures to make you homesick!

May Allah reward you for posting the reality of the wall situation. They rarely show such things on the mainstream media. InshAllah more and more people will find your photos and become aware of the desperate situation Palestinians are living in. You amazed me with the idea of your villages surrounded by the wall with one exit. I can't imagine living in that situation yet the villagers have no choice. Allah yahdihum. Take care Sister.

Thank you for posting this. If I go to Beit Hanina, can I come see you? Husband's family is right there.

are u from Birnabal by the way ?

Nicole: Thank you for visiting my blog and for your du'as. I certainly pray that someone does notice our situation. I wish someone cared. Unfortunately, things mostly go from bad to worse.

Umm Farouq: Ahalan wa sahalan! You know you are invited.

TJ: I am not from Bir Nabala. I am from out in rural Western Pennyslvania, where folks never heard of Palestine, and Israel is someplace in the bible.

very well...I was born and raised in Virginia, i still have family that lives in Birnabala. Thanks for all your work, keep it up ;)