Usually, someone who returns from making the hajj brings gifts for his family, friends and neighbors, an expensive custom it seems to me. I had hoped that my sister in law could bring me a copy of the Saheeh International translation of the meaning of the Qur'an with her when she went this year, but for some reason they didn't give her a visa. Her son did get his visa in time, and he gave my husband an Arabic Qur'an that was published here when he returned. 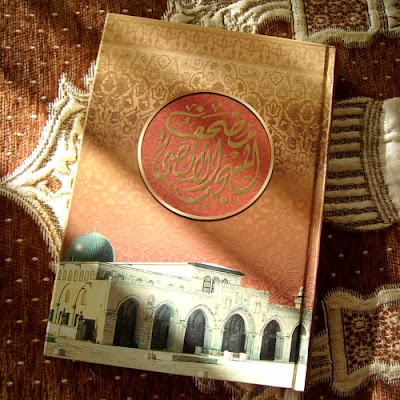 Have you ever seen a Qur'an with a picture on the cover? It has a picture of Masjid al Aqsa on the front cover, and the Dome of the Rock on the back cover. "Mushaf Masjid al Aqsa" is written on the cover, in calligraphy that is difficult for me to read. This Qur'an with it's shiny cover with a picture on it looks so different from every other Qur'an I have seen, that I don't think it is immediately obvious that it is a Qur'an. 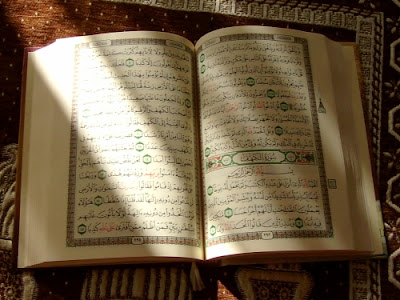 My kids noticed that the script in it is a little larger than the Qur'an I use, so they handed it over to me. I am always looking for one with big script since I often read a little bit with out my glasses right after prayers. I am just learning Arabic; don't think I am good at it. The printing is nice. There was also a prayer rug that is padded, which my kids also immediately handed over to me, since I have trouble with my knees. My goodness I sound old! Padded prayer rugs and large print Qur'ans.

Posted by alajnabiya at 8:49 PM

Email ThisBlogThis!Share to TwitterShare to FacebookShare to Pinterest
Labels: Life in Palestine, Qur'an

LOL @ padded prayer rugs and large print Qurans. If you keep this up you will need help getting up and down from praying. :)

Hi. I would like to know more about your experience in Palestine. I am married to a Palestinian and wondered what to look forward to when I visit. Could you please email me.