I moved to Palestine the first time just before the first intifada began. My mother used to watch the news, and ask me to come back to America, "where it is safe." After a year, we did move back to the US, and we eventually ended up in Los Angeles. There we dealt with the Northridge earthquake and the riots, and each time, my mother-in-law asked us to please come back to Jerusalem, "where it is safe!"

"Safe" is a very relative term.

I know my family worries about my safety here. And although I try to act as cool as a local, my stomach still gives a lurch of fear every time I have to pass soldiers at a checkpoint. But I mostly stay in Palestinian areas where I feel safe and secure. The area I live in basically has no police. It is one of those "area C" zones where Israel has "security control," and the Palestinian Authority is in charge of schools and garbage collection. The Palestinian police have to get permission from the Israelis to enter, and the Israelis rarely enter for ordinary law-and-order type policing. If a couple guys get into a fight, no one calls the cops; the neighbors and family take care of it. If there is a dispute, it is the neighbors and family again. If there are some robberies, the neighbors look out for each other. But mostly, it's quiet. There is way less crime than you might expect considering there are no police, although I did hear that there are drug dealers here who have taken advantage of the lack of police. 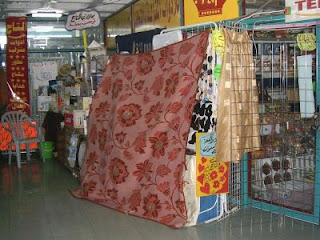 If you talk to older Palestinians, they will tell you about the "good old days" when no one felt the need to lock their doors. But even now, there is a remarkable amount of trust. On the third day of the Eid, I went out with my kids to an arcade in a little mall in Ramallah. It was still Eid and also a Friday, so most of the shops were closed. On the first floor of the mall, there were about 10 shops, and only one of them was open. The shop in the picture was closed, and it didn't look like it was going to open that day. The owner had left a large display of merchandise, costume jewelry and hair ornaments and such, sitting outside of the shop, just covered with a blanket. My daughter thought I was a little crazy wanting to take a picture of a closed shop, but I thought it was one of the nicest things I had seen all day. The building was full of kids in the arcade downstairs, and this shop was right there on the main floor, easily accessible from the street. But all those easily shoplifted items were safe and secure, nobody bothered them except one odd ajnabiya who took their picture.

Posted by alajnabiya at 7:40 PM