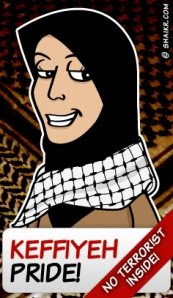 I get sick of people trying to tell me what "my" symbols and choices "really mean." First you have all these people telling me that my hijab is a symbol of oppression, when I not only willingly chose it but had to fight for the right to wear it. Now someone is trying to convince the world that everyone that wears a keffiyeh is showing support for terrorism. I have been amazed this week to see all the coverage in the media and blogs about Rachael Ray wearing a fake keffiyeh in a Dunkin Donuts ad, and their subsequent pulling of the ad.

Personally, I feel a little sorry for Dunkin Donuts. The last thing any company would want to do is make a political statement that will adversely affect their sales. They had to decide whom they stood to lose more from, the radical Christian Zionists or the pro-Palestinian people. It's a lose-lose situation for them. It's the people like Michelle Malkin et al who offend me, for trying to equate every expression of Palestinian nationalism as a threat to world peace. But as much as I would have loved DD to have stood against the pressure and resist this stupidity, I am not surprised they decided to try to cut and run.

Now there is a plan to boycott Dunkin Donuts. I understand the desire to "teach them a lesson" with the boycott, but it is more like an attempt to punish rather than an attempt to teach. And people usually resent those who try to punish them for their unintentional mistakes. IMHO I think more would have been accomplished by publishing some fact sheets about Palestinian culture and history, and mailing them to members of the DD board and executives and handing them to the DD employees while buying some donuts! How do you expect people to respect and sympathize with you when you are busy threatening their livelihood? We are never going to be able to beat the world into submission, but we can show them reality and appeal to their consciences.

The kafiyya has been used as a symbol of Palestinian national pride and resistance for years, but what I find most ironic is that these days in Palestine, it seems to be becoming a symbol of Fatah. My son used to wear one when the winter was cold, but this year he refused to because people on campus see it as a sign of support for Fatah and Mahmood Abbas against Hamas. You know, the guys American and Israel see as the "good Palestinians" the "partners in peace." The ones that were supposed to win the election. (My son, like DD, would prefer not to make any political statements with his clothes. I think he hates all the politicians equally.) Actually, I commented to my family that when I was in Ramallah one cold day last winter, I thought there was a lot less men with kafiyyas around. It used to be that all the older men wore them when it was cold. They weren't amazed by my brilliant powers of observation, but whatever.

You know the folks the US and Israel consider the big, bad, boogie men terrorists? Yes, the Hamas followers. Do you ever see those guys wearing keffiyehs at their rallys? No, those guys wear green baseball caps. 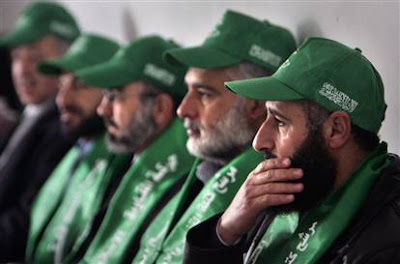 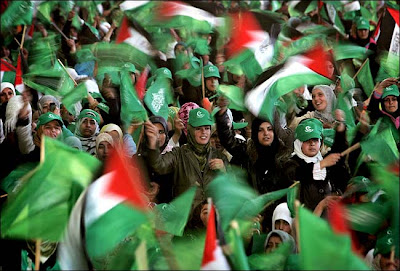 They look just like the John Deere hat my Gran'pap used to wear sometimes. Wait! You don't think he was secretly a Hamas supporter? 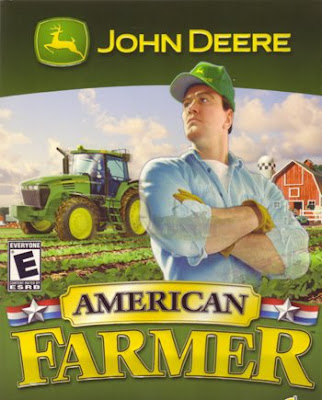 And these kids, what other reason could they have for wearing green hats in a Saint Patty's day parade? Uploaded by P.J.S. on 5 Aug 07, 3.20PM PDT.
And the Okland A's better change their away uniform caps before Michelle Malkin decides they are secretly supporting Hamas. 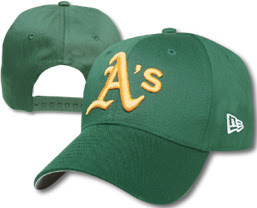 (Hey, John Deere folks, don't be mad at me. I am actually thinking of getting the game in the picture above for my son who loves every sim and tycoon type game.)

Actually the thing that pisses me off the most about this whole business is how much publicity it is getting. Have you heard of the situation of the Hebron orphanages and schools that Israel is trying to shut down? No? Because it is getting very little press, but it is much more serious. There is an Islamic charity in Hebron (al Khalil) that was founded before Hamas, but the Israelis say it is a "Hamas charity." This charity runs 2 orphanages, 3 schools, a library and it has commercial properties to support the schools and charities including a couple bakeries and a dairy. The Israeli authorities say they don't want Palestinians to be "grateful" to Hamas for providing these important services, so they have issued orders to close them down and evict all the people and businesses. To top it all off, they say they have a right to confiscate all of the property! They have shut down the bakeries and some of the businesses, who rented from the
charity. They raided the sewing workshop connected to the girls' orphanage at 1 AM, and stole the sewing machines, fabric and supplies. They cut up the tables to get them out the door. They even took the silverware from the kitchen! Some members of the Christian Peacemakers Team in Hebron have been staying in the orphanage and they filmed the raid. They are trying to prevent the orphans from being thrown out on the street. Seriously, how do the Israelis think this will make them more secure? Won't the kids who go through this trauma be **more likely** to be pushed into violent resistance?

The only place I have seen this covered in the mainstream media is one report on a BBC domestic radio station. There is nothing about it in print on their website that I saw or on the World Service (the international radio). You can hear the report here or go to http://hebronorphans.blogspot.com/ for more info.

Isn't this the sort of thing that we should all be blogging about????

It's a sad world. Innocent kids are going hungry in Gaza, sitting without lights and being denied health care. Orphans in Hebron are at risk of losing the roof over their heads and the food on their tables. But everyone is in an uproar about Rachael Ray's paisley scarf.
Posted by alajnabiya at 9:45 AM

Email ThisBlogThis!Share to TwitterShare to FacebookShare to Pinterest
Labels: “Wear your Kuffiyeh with Pride“ day

The hats are hysterical! Funny how none of the right wingers figured that one out! Ha ha. I love the John Deere one!

Guess what I have almost ready to bloom--thought you would appreciate this--I brought a plumeria clipping from S. CA and it has been slowly growing for 5 years. This is the first year it looks ready to bloom! I am really excited. Maybe I can send you a picture when it comes out. You can already smell the fragrance from the closed buds. MashAllah la howla wala quwwatta billah.

Do you have a blog Nicole? I would love to see the picture.

No blog. Don't think I am ready to expose myself like that to the world. I have a webpage, but it has always just been under construction. I will send it to you by email if you like.

If you want to send me the URL privately, just put it in a comment here and I won't publish it.

Do you think I expose too much? I really worry about that.

LOL @ all those green caps! Yes I already aread about RR's keffiya on another blog. Real important stuff like you say. *rolleyes*

No I don't think you expose too much, I think what you are doing is great - showing people the real Palestine and the life of Palestinians. Keep up the good work!

Nicole is my friend and neighbor. She might as well have a blog with all of the commenting she does on others. Hint, hint, ya Nicole. :)

I took care of that plumeria once, remember? I'm so glad it's finally blooming.

Alajnabiya,
I love the John Deere-Hamas connection. Told my husband about it and he laughed and laughed. When things get so ridiculous and are taken seriously, we have to have some comic relief.

You don't expose too much. But I don't think you have a criticizing tone. I think if I had a blog I would be too big of a critcizer and I don't think that is healthy for me. Yes, I do comment around a bunch, but mostly for friends and people I follow. Thanks Um F!

You have a unique position there as an insider in a very misunderstood place. Your blog opens the worlds eyes to the real situation. May Allah reward you.

Thanks Nicole and Umm Ibrahim. And thanks Umm Farouq for the link, but I don't want to over do the John Deere thing. LOL, I have nothing against their company, only good memories.

mashaAllah you are totally right about our approach to let DD know how we feel. it would most definitely be more productive to somehow contact the board members rather than have people soliciting outside DD in their kifayahs! its sad how every little thing gets taken and twisted out of proportion and what really needs and deserves time on the news is never there. alhamdulillah there are some of us who are not fooled by the media and their little games, but unfortunately, the majority of the nation IS

Thanks for stopping by Umm Yusuf. I don't mind if there are people in their keffiyehs handing out leaflets outside DDs trying to educate people, but I think that the boycott is kind of harsh. The American media is so one sided. It is amazing that Americans thing they have the freest press in the world, but the press self censors itself. I seriously can't believe that only one small US cable company will carry al Jazeera!