I went to visit my sister-in-law a few days ago, and snapped a few pix I wanted to share. She has a pretty view of the local mosque from her front yard. 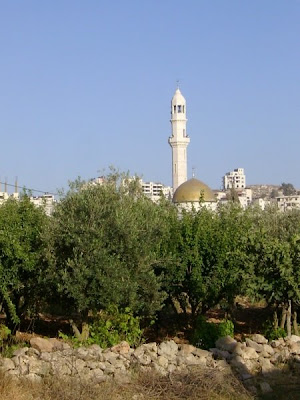 Behind the house there is a field where they had just harvested grain. I don't know if it was barley or wheat, but I know they grow both in this area. My husband brought me a sack of freshly ground barley last week, which I have been adding to my bread recipe. It makes the bread a bit heavy, brown and flavorful. I wish I could have taken better pictures, but when you are visiting someone, it's not nice to wonder off taking pictures of the neighborhood. If you look carefully, you can see some sheep in the field, eating what was left. The bags are full of grain. There were a couple of horses wandering around too, and even a camel, but they left before I could excuse my self to go take the pictures. 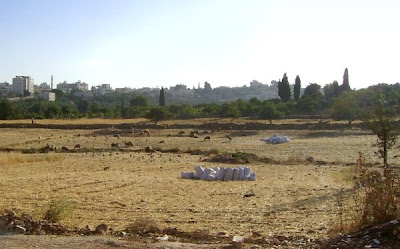 The biggest problem was that it was almost maghrib (sunset) and the area I wanted to shoot was due west. 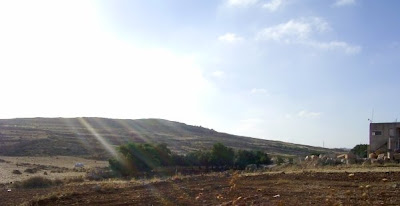 Maybe I will invite my self over one morning to get a better picture.

The farmer drove his car around after the sun went behind the hill, gathering the grain. 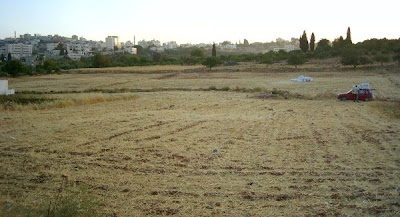 A few days before, I had visited a friend that lives in a neighborhood that has been cut up by the wall. 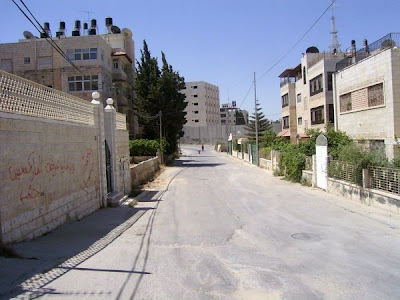 Can you see the truck with the furniture below? He is selling the furniture as he drives through the neighborhood, calling out over a loudspeaker as he drives along. I don't know who buys their furniture off of the back of a truck. They are often the gaudiest kinds. 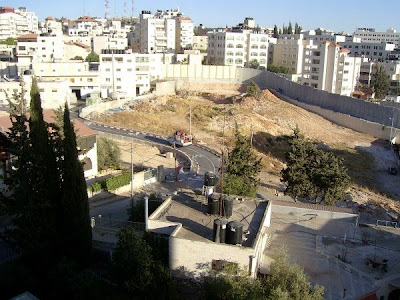 Some places they sell vegetables that way, and there are trucks that go around picking up empty gas cylinders to refill. There even used to be a man in our neighborhood who sold carpets in the street, but he carried them on his shoulders and walked up and down the hills with them. Now that is a tough job.
Posted by alajnabiya at 1:11 PM

Email ThisBlogThis!Share to TwitterShare to FacebookShare to Pinterest
Labels: just pictures, Life in Palestine, The Wall

Masha'Allah your s-i-l has beautiful views!

They sell veggies like that in Algeria too... I wondered what the yelling was the first few times! Still it's a good way of getting your fruits and veg since the women in the villages don't really go out unless it is into Algiers centre.

I'll tell you a secret I never told anyone before. The first time we came here and I heard the gas cylinder truck coming down the street calling on the loudspeakers, I was scared. I thought it was a curfew or something!

Funny, this is an other experience which we share.
When I began my practical training in Beit Jala ten years ago, I had to beg first of all on various Checkpionts to be allowed in the town, because it just was curfew. Having , reached my new home finally, there rang the phone. My boss was on the line and said briefly: "If the soldiers want on the roof , co-operate..."

Now there I sat, just a few hours in Palestine and had to deal with the question what means exactly cooperation!?!

Late that evening the curfew was lifted and I sat on the patio in front of the house, when one heard all at once loud engine rumbling and one roaring loudspeaker announcement; "Batich, Batich, Batich..."

I had got a fright very much, because I thought, the soldiers would roar some instructions which I could not understand with my five words Arabic...

Alhamdulillah there was the nice elderly woman from upstairs, who asked me, if she should bring some watermelon for me too, when she went to buy some from the truck...
;-)

Assalaamu 'alaikum. LOL! It sounds like you had much more reson to be scared than I did.