"No one is comfortable living in Palestine"

I went to replace my daughter's American passport on Thursday. Her old one was damaged by rain water. Luckily the American consulate has arranged an office near Ramallah where people who cannot travel to Jerusalem can go. I think they are only there twice a month, I am not sure. There is nothing on the outside of the building to hint that the office is there, either to avoid implying any official recognition to the Palestinian Authority, or perhaps for security. But lucky for me, every taxi driver knows where it is. I have gone there twice, and each time I asked to go to a hotel that is near it, and the driver immediately asked if I wanted to go to the office for American visas. Must be a popular place.

I met a Palestinian American woman there, and asked her if she was comfortable living here. She said "No one is comfortable living in Palestine." Well, yes, I guess that is true. No matter how well off you are or how happy you are with your own life, the misery of the occupation creeps in to spoil things. But our lives here are so much better than what the people of Gaza are facing. Gaza is getting pounded again. An Israeli in Sderot was killed Wednesday by rocket fire, and the Israeli response has killed at least 32 Palestinians, including a 6 month old baby and 4 boys under the age of 16, who were playing football in a field. Read From Gaza, With Love's account of her life this week. It just makes me ashamed for complaining about anything.

On the way home from applying for the new passport, I went through Ramallah. There was a demonstration at the Manarah. It was a small demonstration. 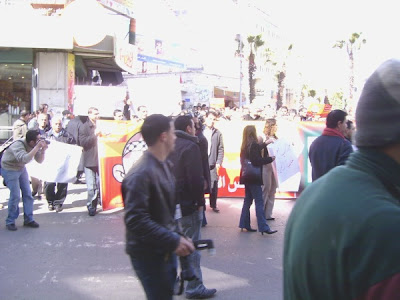 If I understand correctly, they were demonstrating against the Gaza version of the government banning a very pro-Fatah newspaper. The Fatah government in the West Bank recently closed down several Hamas papers in the West Bank. Ya Allah! Save us from these "leaders" who can't put their own self interests aside for the sake of their suffering people.

There seemed to be one camera man for each 10 demonstrators. 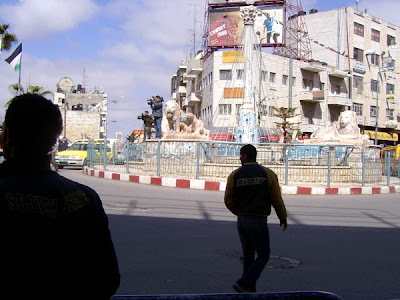 Most people paid no attention at at all to the demonstration, and just continued their shopping. 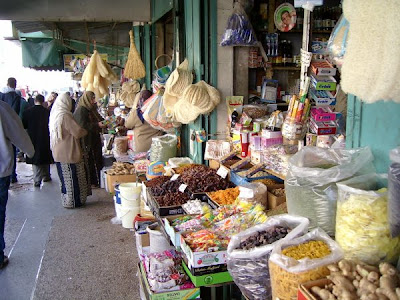 Ramallah has some streets with pricey, posh boutiques, but I like the old fashioned shops with all their wares out on the sidewalks or the open market. 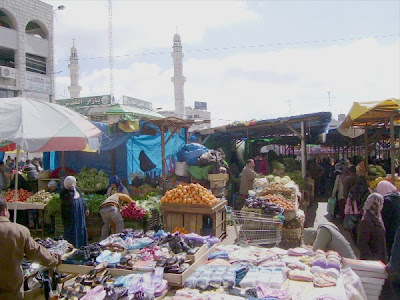 There are lots of pictures I would have liked to have taken, but I feel very uncomfortable taking pictures with people in them. I tried to wait until there were no people or they were all looking away, but that is next to impossible in a crowded market. Besides, the people are part of what makes the market so interesting. And, I am kind of shy about wandering around, taking pictures like a tourist. That , and the fact that my batteries only lasted for about 5 pictures before they went dead. I bought 2 new rechargeables for 35 shekels, about $10US, which is a major splurge for me these days, so I can go back to taking pictures of hills and flowers soon, inshaAllah.
Posted by alajnabiya at 10:17 AM