I have a pet peeve. It might not seem like a big deal to some people, but I really hate those little drop down lists of all the countries. Lots of sites online ask you to register, and you have to tell them what country you are in, but the problem is that where I am is not considered a country. I am NOT going to choose "Israel." I am not in Israel. Way too much of my life is controlled by Israel, but I am not in Israel. Most sites don't include "Palestinian Authority" or "West Bank" or "Palestine" on the lists. Technically, I don't live in any country, I guess.

***EDIT: Sunni Path added Palestine to their list since I originally posted this. Alhamdulillah!***
It really bugs me when you find this on an Islamic site. I like SunniPath, but their tuition rates are according to country, and there is no country on the list for me. Never mind, I probably couldn't afford it. 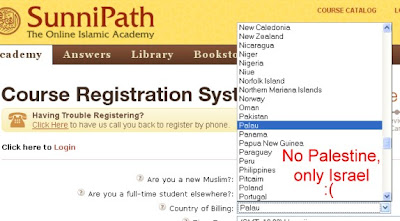 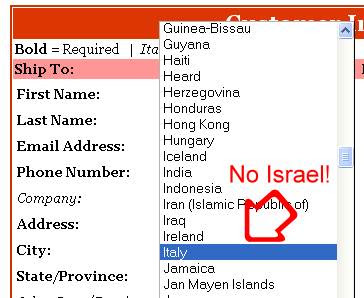 but there is no choice for someone in the West Bank either! I guess I won't be ordering any books from them. Never mind, I couldn't afford them too. 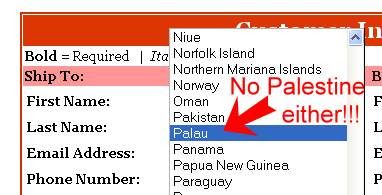 Once in a while you will find one that has Palestine. 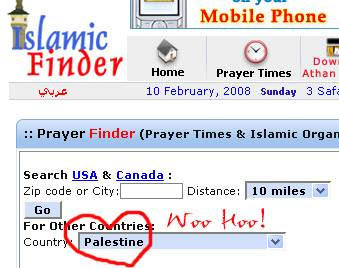 But usually, I just have to choose Jordan. The West Bank used to be part of Jordan, but in 1988 they renounced their claim to it. I have never been to Jordan, but YouTube lists me as being there. 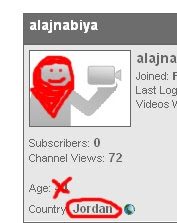 No, I am not trying to hide my age, I just didn't want to be reminded.

A lot of the IP locating software has trouble figuring out where I am too. Saudi Stepford Wife has a wigit on her blog that lists where the latest visitors were from. Every time I visit her blog, it says this:

I can't even read the name. Last week Google decided I was in Germany too. It took several tries before I could switch my settings over to English. Now that's a cute drop down list. They list Klingon, Elmer Fudd and Pig Latin as languages! www.iplocatethis.com has me in Germany too.

www.ipligence.com says we're in Nablus. I haven't been to Nablus in 23 years. 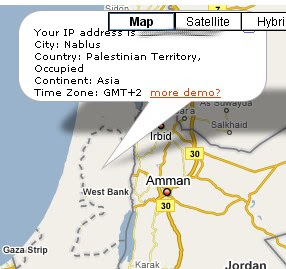 www.ip-adress.com says Jericho. I was there for Eid ul Fitr. I wouldn't mind being there at this time of year. It's warmer. 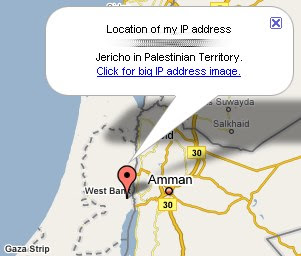 www.seomoz.org decided I am in Israel, although the pointer on the map is on the West Bank side.

No wonder Palestinians can't get a country of their own! Nobody can figure out where we are.
Posted by alajnabiya at 2:12 PM

Nice post...one of those where you don't know to laugh or to cry.

When you leave comments for me and I check site meter, it says "Jericho" or "Occupied Territory" Palestine. I always know it's you! :)

wa 'alaikum assalaam brnaeem. Much of life here has me searching for a way to laugh to keep from crying. Thanks for stopping by.

Umm Farouq, I wish I was in Jericho. I'm cold! And they are forcasting snow again in a couple days.

Wow, subhanAllah, it never occurred to me, the location tracker is...well funny's not the word. Odd.

I just checked my site meter and it said " Palestinian Territory, Occupied"

I checked the widget on my blog and it said, "Palestinian Authority". Unspecified city or town though.

SunniPath has just added Palestine to the registration form. I feel so bad that it was ever missed!