There is a lot of rain forecast for this week, so when there seemed to be a break in it today, I decided to go out for a walk. I thought I would climb a hill near my house and get a picture of the dramatic, puffy clouds and the bright blue sky peaking through. Before I was even half way up the hill, the sky had become solidly gray and it started to drizzle. Typical.

Our village is in the foreground, and on the hill in the back is an Israeli settlement. 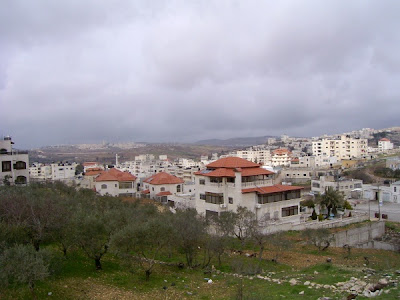 I didn't mind getting a little bit wet once I saw that the first almond trees had burst into bloom. I really wanted to get a picture of them, so I was wandering around in the soft rain trying to get a good shot. Just the kind of thing to make the neighbors think this ajnabiya (foreign woman) is a bit majnoona (crazy). 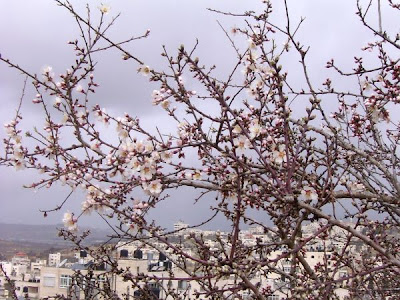 Drat my cheap camera! I hate not being able to manually focus. None of the close-ups were properly focused and then the batteries went dead. Typical.

So I went off to do my shopping, and the rain got stronger. I walked to the grocery store (for dry goods and dairy), then the butcher (who only has chicken), the green grocer for some onions and finally the bakery. I remember, once upon a time, being able to get all my groceries in one warm, dry store. Vaguely. I have been here for 13 and a half years, so I am used to having to schlep all over the place for the ingredients for a simple meal.

Just as I reached my house, the rain stopped, the gray clouds split, and the sky was full of puffy, dramatic clouds and patches of cheery blue sky. It would have looked pretty in a picture from the top of the hill....

And then, I realized that my darling husband had dead bolted the door I had the keys to from the inside of the house, and left by a door I didn't have the keys to open. Typical. 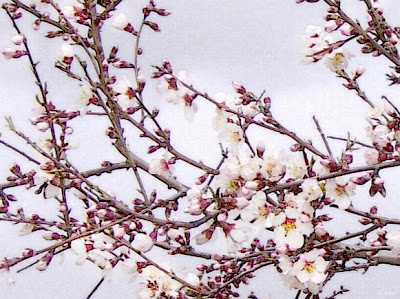 Posted by alajnabiya at 9:46 PM

Email ThisBlogThis!Share to TwitterShare to FacebookShare to Pinterest
Labels: in bloom, Life in Palestine

It's time for fun.
You have been tagged. Please see, here: