Google Earth is the coolest thing that scares me. I love playing around with it, doing a little virtual traveling, since that is the only kind of traveling I can do. Sometimes out of homesickness, I just look at my mom's house, or the places I used to live. Sometimes I wonder who all those rich people are with the big swimming pools north of the pyramids. 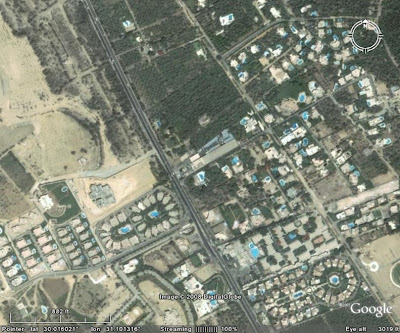 What scares me is that if these high resolution images are available publicly, what must the government spy satellites be able to see? They must be able to see the color of my socks on the clothes line in the back yard! Anyway, my son pointed out that they have some new images of our area. Now you can see the wall, and the new road the Israelis built out of our village since they closed off all of the old roads. The new pictures are so clear that you can count the trees in my front yard.

Here's the Qalandia check point, although it is now more like an international boarder crossing. 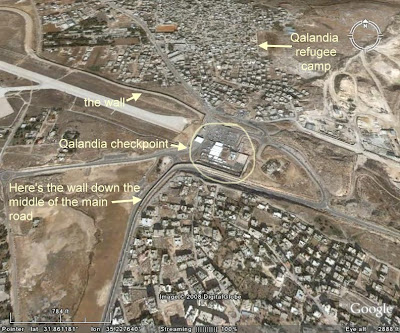 It's so huge! The first time I came here, back in the 80's, we used to just breeze through the area on our way from Jerusalem to Ramallah, never slowing down. When I moved here in the 90's , there were only occasionally soldiers there checking people. This is what it looked like in 2003, the day my son moved to Bir Zeit because going back and forth every day was too much hassle. He's just on the other side of the turnstile going toward Ramallah. The people on the left are waiting in line to go toward Jerusalem. About 3 seconds after I took this picture an older man came up to me and told me to stop taking pictures before the soldiers noticed me. 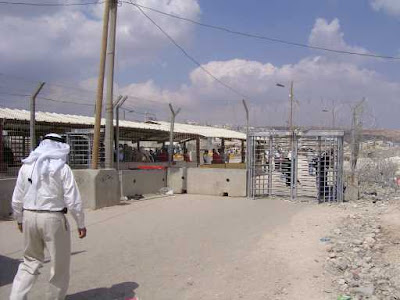 I just want to point out that both sides of the checkpoint are land occupied in 1967. This video shows what it is like going through the new terminal.


I have posted a few of my pictures to Panoramio, in hopes that they will get added to the Panoramio layer in Google Earth. For now, you can look at them by going to my page on Panoramio and either looking at them on the regular Google satellite maps or click on a link to find them on Google Earth.

I have also posted a few pictures taken by members of the Christian Peacemakers Teams (a program of Brethren, Quaker and Mennonite Churches and other Christians that support nonviolence) around the village of at-Tuwani South of Hebron (al-Khalil). I had read about at-Tuwani on Joy_in_Palestine's blog. She is one of the CPT memebers living in at-Tuwani to document the harassment the Palestinians face from settlers. Here is my favorite picture from the CPT gallery, because I need something pretty after the depressing stuff. 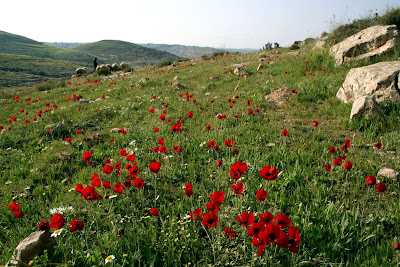 You can also read about another CPT project on the Orphans Under Threat blog. In February, the Israeli army ordered the closure, eviction and confiscation of 2 orphanages and 3 schools owned by an Islamic charity, along with other facilities, because they say they are "Hamas run." Some members of the CPT have been staying in the orphanages to document what happens. A few days ago, soldiers came and confiscated the sewing machines and fabric from the orphanage's workshop! It is a shocking situation, but seeing sincere, committed Christians and Muslims working together gives me hope.

Need another pretty picture to balance out the ugly realities? Try this wonderful picture of rocky hillsides and olive trees near Silwad. What a wonderful view!
Posted by alajnabiya at 9:58 PM

Email ThisBlogThis!Share to TwitterShare to FacebookShare to Pinterest
Labels: just pictures, Life in Palestine, The Wall