Spring is the time for sour foods in Palestine. Everyone seems to love sour stuff. Many people around here have almond trees, but no one seems to leave them on the trees to mature. They are eaten when they are fuzzy and green. Now "karas" are in season. They are crunchy, unripe cherries. My kids love to dip them in salt like they do with the green almonds. My youngest will even spend his pocket change at the vegetable store to snack on them like candy. Unfortunately, we don't have a karas tree. 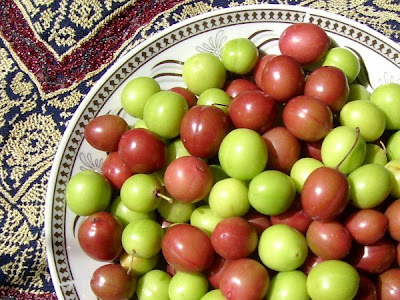 They will eat the unripe plums in the same way. Remember the blossoms from a few months ago? Now they are getting big. 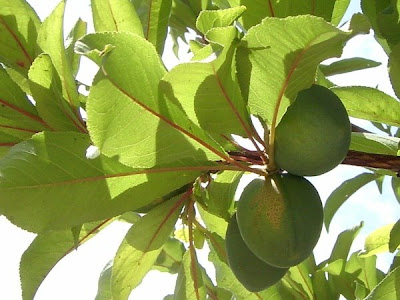 When the clover was in bloom, I used to see many children in the neighborhood eating the flower stems, which are tart. Sometimes we put the leaves in salads, but generally I prefer to look at my flowers! 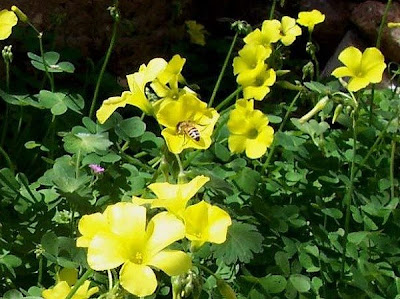 Now they all break off the curly little tendrals of the grape vines to munch on. 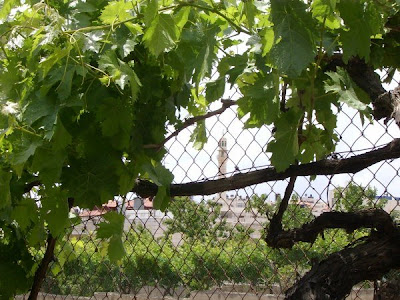 These askadinia (loquats) are the first fruit in our yard to ripen (except for lemons, which are ripening year round). 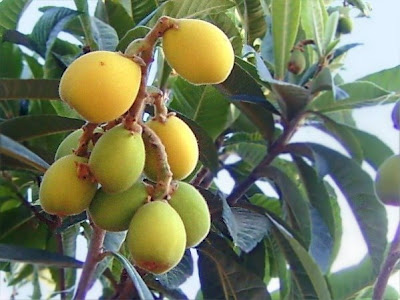 They are sour even when ripe and juicy. 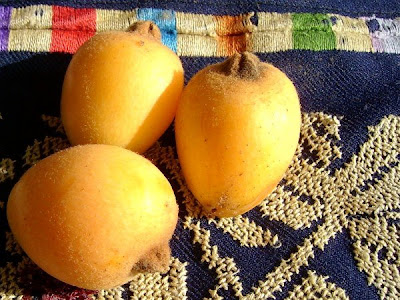 While I was out taking pictures of the askadinia, I saw part of the air show the Israelis were doing to celebrate their 60th year. They kept flying over low and loud. 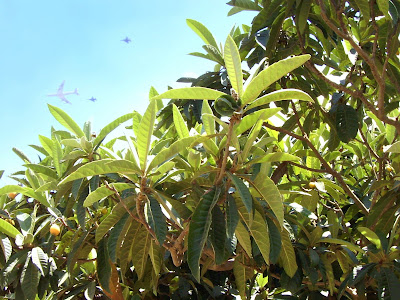 Sixty years to celebrate for them, 60 years of broken dreams and mourning for us.

The embroidery in the background in 2 of the pictures above is from a traditional Palestinian thob, worn by many women here for both special occasions and every day dress. This particular one had been worn so much that the embroidery was fraying and the owner wanted to throw it out. I rescued it, for I don't know what. I just couldn't see throwing something that had that much work in it away.
Posted by alajnabiya at 6:44 PM

Just wondering, doesn't all that sour, unripe fruit give people stomach upset or does the stomach become kind of accustomed to it?!

Beautiful nature pics as usual, masha'Allah. I wish I could get out more to photograph (to photograph ANYTHING! LOL)

No one seems bothered at all by the unripe fruits. I was told that they would make you sick as a kid too, so maybe it's an American thing, or parents told their kids that because they wanted the larger volume of ripe fruits. On the other hand, it seems like all the older people here are convinced that very cold things will make you sick. If the kids got even a slight sniffle in the summer, they would say it was because they ate ice cream or drank water with ice in it.

I was admiring the "table cloth" in those pics :) I just love textiles.

May Allah (swt) reward you for rescuing the beautiful thobe!