The field behind our house has a completely different set of wild flowers growing in it than the field next door.

The red flowers are anemones. 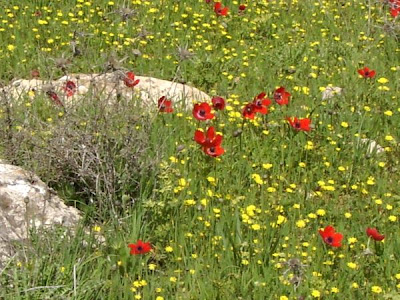 I wish I could get them to grow in our yard, but they don't grow where it is plowed regularly, I guess. 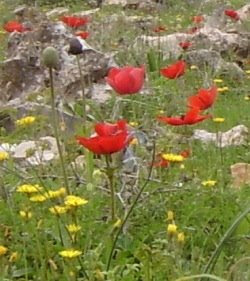 I took the above pictures over our back fence, but I can't climb over it to take closeups. (Which has been driving me nuts, but let's face it... it's a short trip.) So I finally convinced Number Two Son to go over the back wall and take a few pictures. Every picture he took had garbage in it! Not accidentally, but intentionally. He decided to do some sort of exposé on litter. Actually, they were rather artfully composed, but I wanted pictures of flowers! Do you think this one of those, "if I do the job badly enough, maybe Mom will stop asking me" ruses? He is 16, after all.

He did take one finally without the trash. 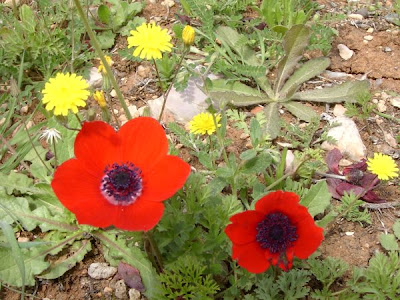 Email ThisBlogThis!Share to TwitterShare to FacebookShare to Pinterest
Labels: in bloom

Mabrouk on finally getting the photo that you wanted! I've had a 16 yr old son, and they can be rather wayward. LOL

Nice to find your blog.

He's usually the most helpful and cooperative kid, but for some reason he seemed to think that asking him to take pictures was "above and beyond the call." Climbing over the wall wasn't the problem, he does that every day on his way home from school.