I don't want to talk about politics!

But I feel compelled to. I would rather talk about wild flowers in bloom and birthday parties, but it seems wrong to dwell on happy things when there is so much wrong in the world. After the slaughter in Gaza and then the shootings at the yeshiva in Jerusalem, I just feel sick of reality. I want to move out, I don't want to live in reality any more.

The killings at Yeshivat Mercaz Harav was no cause of celebration for me. No matter how horrible the massacre of Palestinians the week before was in Gaza, or how many of our kids died, we should never look at killing someone else's children as a suitable revenge. Sometimes you hear people say, "we have to let the Israelis feel some of what they are doing to us," but no one looks at their dead child and thinks "oh, now I understand how our enemies feel when their kids die." Revenge leads to revenge.

Chris Hedges from Truthdig wrote an excellent post that was reprinted on the IMEU site.

War creates a world without empathy. Those who have empathy cannot, as did Palestinian gunman Alaa Hisham Abu Dheim, coldly murder students in a Jerusalem library. Those who have empathy cannot drop tons of iron fragmentation bombs on crowded Palestinian refugee camps in Gaza, killing more than 120 Palestinians in a week, of whom one in five were children and more than half were civilians. Those who have empathy do not, as Israeli Deputy Defense Minister Matan Vilnai did, thunder at the Palestinians that they face a shoah, meaning catastrophe or holocaust. Those with empathy are unable to rejoice, as many leaders of Hamas did, over slaughter, as if the murder of the other’s innocents is justified by the murder of your innocents.

The yeshiva that was attacked was known for its support for and promotion of the settlement movement. Gideon Levy described the school in an article in Ha'aretz, an Israeli paper (but I am copying this from the Global Voices site, since the Ha'aretz link is in Hebrew):

“The flagship of religious Zionism” was among the used phrases, along with “holiest of holies” and even an exaggerated comparison to the Al-Aqsa mosque in terms of its holiness as a location. Some of the crowns tied to the school's name are indeed appropriate. There is nothing that can justify the horrid killing of youth in a library. But it is important to remember, even in this difficult hour, what came out of this school.

Many Rabbis who led some of the more damaging steps in the history of Zionism were educated there. Many right winged, Arab-hating instigators came from this “flagship”. Religious leaders such as Moshe Levinger, Haim Drukman, Avraham Shapira, Yaakov Ariel, Zafania Drori, Shlomo Aviner and Dov Lior, all admired by their students, were raised and raised generations of nationalistic youth within the walls of this school. For instance, how do we grasp Rabbi Lior's words from the past, who ruled in 2004 that the IDF is permitted to kill innocent people? That only we can? Lior declared that “one must not be blamed for the ethics of gentiles”. He ruled that the Knesset cannot decide to evacuate settlements, and that soldiers can refuse to obey orders to evacuate settlers. Rabbi Drukman made similar claims. Rabbi Aviner, another graduate of the school, called out to kill those refusing the compulsory draft. At that time there were mostly refusals from left-wing youth. In addition, Aviner claimed that soldiers who die in wars are not a reason for national mourning, and requested to cancel the Memorial Day. He compared the “road map” plan for peace as if conceding to Hitler. Evacuating settlements, he claimed, is an unlawful sin.

My heart is torn with the killing in the yeshiva. No one deserved it. Not the innocent in Gaza and not those dead in Mercaz Harav, Jerusalem. They all died in vain. They already paid the heaviest price. Their families and surrounding will surely gain more radical views, which will continually lead us through this never-ending cycle of bloodshed.

The settlers have vowed revenge, and said they would build a new settlement for each of the students killed. Lo and behold, next day the Israeli government announces that they will be building 750 new housing units in the West Bank settlement of Givat Ze'ev. That's the settlement in one of the photos I posted last month. You can see the very tip of the settlement at the top of the hill in the background. InshaAllah I will get a better picture to share one day. 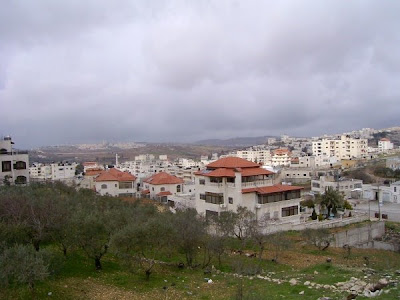 A Peace Now report shows that 44.3% of the area of Givat Ze'ev is on private Palestinian property. You can see a arial photo of the settlement with the land ownership marked here. (It's a Word Document) There is an excellent article on Miftah about the settlements ringing East Jerusalem, belying the idea that Israel ever intends to allow any future Palestinian statelet have any portion of Jerusalem.

Tomorrow, inshaAllah, I am going to post about FLOWERS and BIRTHDAY cakes.
Posted by alajnabiya at 10:18 PM

Email ThisBlogThis!Share to TwitterShare to FacebookShare to Pinterest
Labels: articles, Life in Palestine